The NFL announced on Wednesday that they are upholding the one-game suspension for WR Mike Evans following his role in a brawl against the Saints in Week 2.

Tampa Bay is now set to play the Packers in Week 3 without Evans, who appealed the suspension.

Both Evans and Saints CB Marshon Lattimore were ejected after fighting early in the fourth quarter. Lattimore started exchanging words with and shoving some other Bucs players, then Evans charged off of the sidelines and knocked over Lattimore, sparking a bigger brawl.

The two players have a history together and have gotten tangled up before, which factored into the league’s decision here. 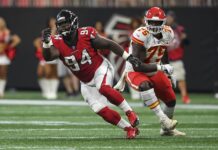