On Tuesday, Rams GM Les Snead met with reporters and was asked about QB Jared Goff and his future with the team. 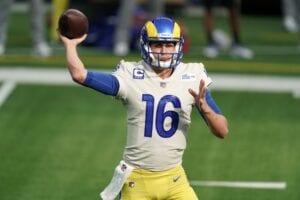 Snead said that Goff is a Ram “at this moment” before adding: “It’s way too early to speculate.”

“Not going to get into specifics on those. That’s the beautiful mystery of the future,” Snead said, per Greg Beacham. “Jared Goff is a Ram at this moment. It’s way too early to speculate.”

Snead also acknowledged that it would be difficult to move on from Goff because of the salary cap ramifications, but he did say that “anything can be done” in regards to the cap.

Last we heard regarding Goff, Steve Wyche reported that the relationship between Rams HC Sean McVay and Goff is strained at the moment.

Wyche said the sources he’s talked to have told him McVay and Goff basically need marriage counseling after 2020 was hard on their working relationship.

“The people I’ve spoken to said basically at this moment the relationship with Goff and McVay: not great,” Wyche said. “They need marriage counseling is what one person said to me. I think this is something that they’re going to be able to work through, but there’s got to be some healing and that’s not just with Jared Goff‘s injured thumb.”

Goff struggled at times in 2020, especially with turnovers, and that played a large role in the Rams’ inconsistencies this season. However, he gutted through a thumb injury in the playoffs and the Rams are heavily invested in him financially.

McVay has drawn some attention for not outright committing to Goff as the team’s franchise quarterback going forward after Los Angeles was knocked out of the playoffs by the Packers Saturday.

For his part, Goff was not happy about being replaced by QB John Wolford to start in the wildcard round against the Seahawks.

Goff, 26, was the No. 1 overall pick by the Rams out of Cal back in 2016. He was entering the final year of his four-year deal worth $27.9 million when the Rams picked up Goff’s fifth-year option.

From there, the Rams signed Goff to a four-year, $134 million extension that includes an NFL record $110 million guaranteed in 2019.

According to Over The Cap, trading Goff would free up $12.245 million in cap space and result in a $22.2 million dead money charge.

We’ll have more on McVay and Goff as the news is available.