According to Ian Rapoport, the Lions are expected to use the franchise tag on WR Kenny Golladay if they can’t agree to a long-term deal. 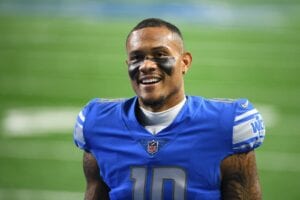 The window for teams to tag players opens on Tuesday and closes on March 9. Once tagged, the Lions would have until July 15 to work out a long-term deal for Golladay. After that, both sides can’t negotiate until after the season.

The two sides had some talks right before the start of the 2020 season but weren’t able to come to an agreement.

Over The Cap projects the franchise tag for Golladay to be $16.43 million.