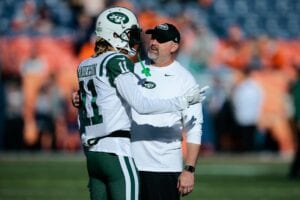 Morton, 51, began his NFL coaching career with the Raiders back in 1993. He has worked for a number of teams including the Packers, Raiders, Jaguars, Chargers and 49ers before the Saints hired him as their WRs coach in 2015. After two years in New Orleans, Morton agreed to become the Jets’ offensive coordinator in 2017.

The Jets elected to fire Morton last year after one season and he later joined the Raiders as a senior offensive assistant.