Dave Birkett is reporting that the Lions have re-signed restricted free agent DT Khyri Thornton to a two-year contract.

According to Birkett, Thornton receives a two-year, $3.3 million contract with a $325k signing bonus.

Thornton, 27, is a former third-round pick of the Packers back in 2014. However, despite his draft status, Thornton lasted just a little over a year in Green Bay before he was waived at the start of the 2015 season.

After a brief stint with the Patriots, the Lions later claimed him off of waivers during the 2015 season and he finished out the year in Detroit before returning on a one-year exclusive rights contract.

In 2016, Thornton appeared in 13 games for the Lions and recorded 18 tackles and a sack. 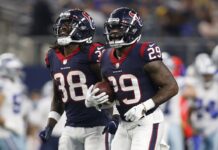