The Detroit Lions announced Friday that they’ve signed K Matthew Wright to a futures contract for the 2021 season. 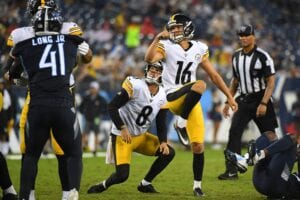 Here’s the updated list of futures signings for the Lions:

Wright, 24, wound up going undrafted out of UCF back in 2019. He later signed a rookie contract with the Steelers, but was waived coming out of training camp.

Since then, Wright has been on and off of the Steelers’ practice squad.

In 2020, Wright appeared in three games for the Steelers and converted 4 of 4 field goal attempts and 7 of 7 extra point tries.