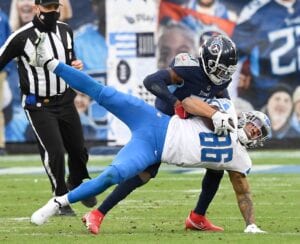 Bryant, 22, signed on with the Lions as an undrafted free agent out of Washington before eventually signing a three-year, $2.28 million contract with the Lions in May of last year.

Bryant landed on injured reserve due to a concussion back in October but was activated after a couple of months.

In 2020, Bryant appeared in five games for Detroit and recorded one reception for 44 yards and no touchdowns.