According to Tom Pelissero, an MRI has confirmed that Lions CB Jeff Okudah tore his Achilles. 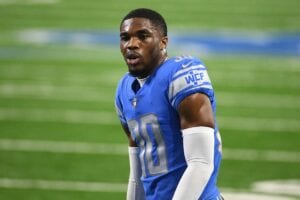 The injury will knock Okudah out for the rest of the season and is a big blow to an already shaky Lions secondary.

Okudah, 22, started one season at Ohio State and earned All-American honors before the Lions used the No. 3 overall pick in the 2020 draft on him.

He had just come off of injured reserve following groin surgery ahead of the 2021 NFL season.

In 2020, Okudah appeared in nine games for the Lions and recorded 47 tackles, one interception, and two passes defended.