49ers DB Tarvarius Moore will compete for a starting role next year. HC Kyle Shanahan was impressed with how Moore ended the 2020 season and also complimented his contributions on special teams.

“He played half a year as a starter and we thought he finished his last five games as a true starting safety, and before that he was always one of our best special teams players,”  Shanahan said, via NBC Sports.

49ers GM John Lynch appears ready to move on from DB Jaquiski Tartt, which would clear another avenue for Moore to start.

“We haven’t talked to him,” Lynch said. “We haven’t gone there, yet. We will see. He’s a free agent. We think highly of Jaquiski, he’s played a lot of good football for us and we’re grateful for that. Talented, talented dude. And he’ll play in this league and continue to play at a high level.”

Cardinals vice president of player personnel Quentin Harris spoke about the team’s decision to trade for WR Marquise Brown during the draft.

“At that point in the draft, is Hollywood Brown going to have more of an impact than anyone that we were going to draft, and the answer was yes,” Harris explained on The Dave Pasch Podcast. “At that point, it was an easy call for us. He’s going to have more opportunities here than in Baltimore. Even though we do have a solid run game, we’re going to throw the ball around. One thing we’ve been lacking over the years is that run-after-catch guy. Now we’ve got two of them. We’ve got two guys that can make mismatches in space.” 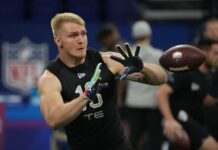