Lions’ new OC Anthony Lynn said Jared Goff has been an “absolute pleasure” this offseason and is already becoming a “leader on our football team.”

“It’s been an absolute pleasure to work with Jared,” Lynn said, via Compas On The Beat. “Just giving him some input and watching him grow as a leader on our football team, that’s been really cool to see. But he’s had some really good practices and hopefully that carries over to training camp and the regular season. But I’m very pleased with what I’ve seen so far.”

Lynn pointed out that he’s observed Goff on a pair of separate occasions as the Chargers’ former head coach when the two Los Angeles organizations had joint training camp practices.

“I watched the guy for two years up close and personal in practice and I was always impressed with his arm talent,” Lynn said.

Vikings’ veteran S Harrison Smith, who is entering his 10th year in the NFL, acknowledged that he’d like to retire with Minnesota.

“Yeah,” Smith said, via Will Ragatz of SI.com. “I mean I don’t know what happens at the end of careers. I was listening to, it might’ve been the [episode] with Champ [Bailey], Pat Pete was saying at that ten-year mark, sometimes things change. I don’t plan on that happening, but the NFL is the NFL. It’s always wild. But I’ll always consider myself a Viking no matter what.”

Smith pointed out that he’s never been an outspoken or flashy player, which could contribute to a lack of recognition for his success on the Vikings.

“Realistically, as far as recognition goes, I think it does hurt a little bit not being a little more outspoken, a little flashier, celebrating a little more. I’ve always played better when I make a play — and obviously you want to get excited about it, it helps the team out, gets the momentum going — but move to the next thing. One play’s not going to cut it, one game’s not going to cut it. It’s a whole season, it’s a whole career. So much goes into it, it’s hard for me to waste some of my effort celebrating, as funny as that sounds.”

Smith believes the Vikings must show more “confidence and positivity” in order to get over the hump, and thinks it’s up to the veterans to instill that culture in younger players.

“You can always work out harder, you can always work on schemes. We’ve always had a really good locker room, the chemistry’s always been great. That’s kind of just a tribute to the front office and how they select guys, bring guys in. To me, it’s not necessarily tangible, but the confidence and positivity, I think, are real things that matter. And they matter when the games are win or go home. Things are going to go bad, you’re going to have a tough series, you’re going to have a tough game, but if you don’t blink when those things happen, you trust what the team is and what the coaches bring to the table and what we all bring together, that’s how teams win. In my opinion, that’s how Tom Brady has won. I think he just permeates confidence throughout the entire locker room, throughout the organization, and it rubs off on people. And they know when it comes down to it, they’re going to make one more play. That’s kind of the mindset I think we have to have to make that one more play. No matter who makes it, offense, defense, whatever, that’s the only way to win in those times. Everybody’s just about as good, everybody’s got great players, but who’s going to do it when it matters? I think that’s up to us vets to start ingraining it into the group and into the organization.” 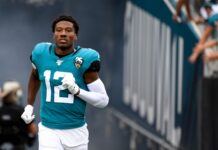