Seahawks QB Geno Smith acknowledged that this week is different in a lot of ways as he prepares to start in the place of Russell Wilson, who has never missed a game going on 10 years in the NFL.

“First and foremost, my first start in a little bit, but I always played in the preseason and I’ve started them,” Smith said via NFL Media’s Ian Rapoport. “So, it’s not like I haven’t been playing football at all. The difference is now, it’s physical reps. I’m getting all the reps. You always take mental reps and prepare that way, but this is about physical preparation as well, more than just the mental side of playing quarterback. This week was different because I’m taking physical reps, as well.”

Smith added he’s not putting anything extra on his performance while Wilson is out. Smith had just nine passes combined the past three seasons and a strong performance could mean a starting opportunity for him somewhere else in 2022. But he’s just focused on doing what he can to get the win.

“The moment is what it is,” Smith said. “We have a Sunday night game in Pittsburgh. It’s one night, not the rest of my life. Mostly, it’s a game I love to play, a game that I’m passionate about. It’s one that I prepare for and am ready for whether I get to play or not. It’s not a chance to showcase anything, that’s how I see it. I’m not going to change my stripes. I’m just looking forward to playing football.” 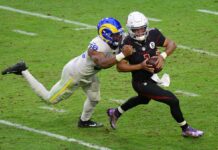