Mark Maske of the Washington Post reports that the NFL is expected to argue that Browns QB Deshaun Watson should receive a “significant” suspension for violating the league’s personal conduct policy. 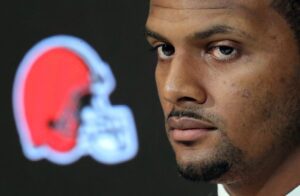 A source from Watson’s camp tells Maske that the NFL will “probably” will seek a suspension of one full season for Watson. However, a source familiar with the league’s view of the matter cautioned to be “careful” about specifying a precise length at this point.

“Significant would be the proper term,” the source tells Maske.

As for a potential timeline for the process to be completed, Maske reports that the NFL hopes to have the whole thing including any potential appeals to commissioner Roger Goodell or a person designated to oversee the matter completed by the start of training camp.

Maske adds that the NFL could impose a fine in addition to any lost salary from his unpaid suspension and there’s still a chance they could leave the door open for further discipline if new information is brought to light.

The NFLPA reportedly intends to cite the lack of suspension from the NFL regarding the personal conduct of owners such as Daniel Snyder, Robert Kraft and Jerry Jones as part of Watson’s defense

For what it’s worth, the Browns are scheduled to open training camp on July 27.

Mary Kay Cabot, citing a league source, reported earlier in the week that the Browns are still “all in” on Watson and are not looking to void his record $230 million contract or trade with the Texans.

Cabot added that “nothing has transpired” since Watson signed his five-year, $230 million deal in March to cause the Browns to change their opinion.

Cabot pointed out that Cleveland has extra protection on his contract that would enable them to void his deal, but it’s clear things aren’t moving in that direction.

Watson had a meeting with the NFL to discuss the 24 charges of varying degrees of sexual misconduct that Watson faces in civil court.