According to Adam Schefter, the NFL has fined the 49ers, Jaguars and Cowboys for violations of work regulations during OTAs. 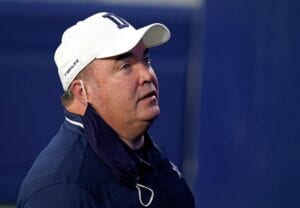 Both organizations and the head coaches were fined, including:

In addition, Schefter reports the 49ers were forced to cancel the final week of OTAs they had scheduled last month. The Cowboys will forfeit one practice during the first week of OTAs next offseason and Jacksonville will forfeit two in that same timespan.

The NFL strictly monitors what players can and cannot do during spring OTAs. No contact is allowed and there are phases that ramp up to on-field work.

All OTAs are voluntary until mandatory minicamp at the end of the program.

The NFLPA organized a collective exercise of players’ rights to stay away from voluntary OTAs to protest what it felt was teams taking advantage and pushing the envelope of what was allowed, leading to injuries.