Adam Schefter confirms the NFL has opened an investigation into the Packers and QB Aaron Rodgers for possible COVID-19 protocol violations. 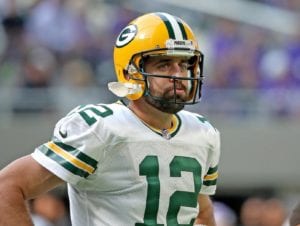 As reported by Jay Glazer previously and again by Schefter, Green Bay and Rodgers face potential fines but no suspensions for violations at this time.

Schefter says the league will be looking at video from the team facility to see if Rodgers adhered to masking requirements for unvaccinated players in the building.

The NFL will also review a Halloween party that Rodgers attended with multiple teammates. The NFL restricts unvaccinated players from gathering outside the team facility with teammates and believes a violation may have occurred at the party.

Multiple coaches and league executives complained to Schefter that it appears Rodgers and the Packers were held to a different standard of enforcement for the protocols. For example, the league sent out a memo that any unvaccinated inactive players must wear a mask in the bench area. Rodgers did not do that during the preseason.

“That’s B.S. … What’s going on in Green Bay, that’s not what teams were told by the NFL. Our players wore masks all the time. We made our guys that weren’t playing wear masks,” one executive said.

Rodgers will miss Week 9’s game against the Chiefs due to his positive test. Because he’s not vaccinated, he must sit out 10 days at least which would have him back by Saturday before Week 10 when the Packers are scheduled to play the Seahawks.

In 2021, Rodgers has appeared in eight games and completed 67.1 percent of his passes for 1,894 yards, 17 touchdowns and three interceptions. He has also rushed for 47 yards and two touchdowns.

We’ll have more on Rodgers and the COVID-19 protocols as the news is available.