According to Dave Birkett of the Detroit Free Press, the Lions hosted some notable draft prospects on Friday including:

New Titans OC Matt LaFleur said during an appearance on 104.5 FM’s “Midday 180” that he recently sat down and watched tape of QB Marcus Mariota and came away even more impressed than he already was.

“It’s interesting, because you get to know these guys a little bit when they come out from the draft,” LaFleur said, via TitansOnline.com. “And he is as impressive as they come. He is humble, just a high-character person. And when you watch the tape, you notice – I always call them prerequisites for good quarterback play. He is a natural thrower, and he is fearless. And he is an unbelievable competitor. I am just really excited to get a chance to work with a guy of his skill-set.”

LaFleur believes Mariota will be a great fit for his offensive system, citing his athleticism and throwing ability.

“Yeah, because I just mentioned – I think he is fearless,” LaFleur said. “I think he is an extreme competitor. I think he is a guy who can make teammates around him better and I think he is a natural thrower. And he does have that element of athleticism that not all these quarterbacks have. So just to add that as another weapon within the offense, I think that gets any offensive coach very excited.” 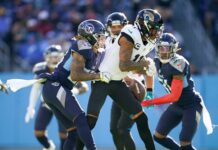