“Honestly, I’m never going to give up. You don’t want to give up something you started. You want to finish the right way,” said Rice.

Rice, 29, says he has been training in hopes to return to the NFL and is taking part in the NFLPA Collegiate Bowl this week as a mentor.

Bach mentions that restrictions in the NFL’s collective bargaining agreement prohibit coaches from discussing football matters with players until the start of the official offseason program.

The 49ers will need to make a decision as to whether or not to keep Kaepernick at his current salary by April 1, which is three days before Kelly and talk football with any of his players.

Vaughn McClure of ESPN believes the Falcons could be a landing spot for impending free agent LB Bruce Irvin, should he reach the open market.

McClure points to Irvin’s comments back in May when he said he has a strong desire to play for Atlanta as a key factor into him possibly signing with the Falcons.

It’s worth mentioning, however, that Irvin said recently that he would take a pay cut to return to the Seahawks in 2016, so it will be interesting to see what he elects to do this offseason.

Regardless, McClure believes that enough money could lure Irvin away from Seattle.

McClure notes that Irvin is worth more than double than the five-year, $22.5 million deal with $9 million guaranteed that the Falcons gave OLB Brooks Reed, making him an easy expenditure for the Falcons’ front office.

Redskins Zeroing In On Chase Young? 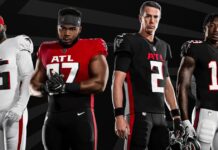 183,841FansLike
7,623FollowersFollow
273,936FollowersFollow
© NFLTradeRumors.co is an independent news source and has no affiliation with the National Football League (NFL), NFL.com, or any team(s).
wpDiscuz