Jeremy Fowler of ESPN reports that the Packers have picked up their fifth-year option on OLB Rashan Gary. 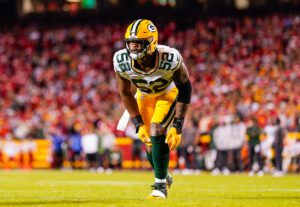 The fifth-year option is projected to cost the Packers around $10,892,000 fully guaranteed for the 2023 season, but won’t prevent them from getting a long-term deal done before then.

In 2021, Gary appeared in 16 games for the Packers and recorded 47 tackles, 9.5 sacks, two forced fumbles and a recovery.