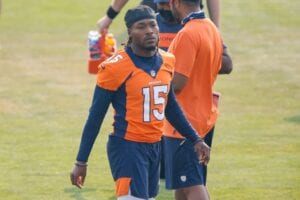 The full list of players on the Packers practice squad includes:

Winfree recently worked out for the Packers.

Winfree, 24, is a former sixth-round draft pick by the Broncos out of Colorado back in 2019. He signed a four-year, $2.7 million contract with Denver, but was placed on injured reserve last year.

The Broncos opted to waive Winfree coming out of training camp.

In 2019, Winfree appeared in three games for the Broncos but is yet to record any statistics.