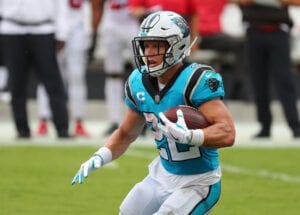 The Panthers made several other practice squad moves including:

McCaffrey was placed on injured reserve with a high ankle sprain back in September.

In 2020, McCaffrey has appeared in two games for the Panthers and rushed 41 times for 156 yards (3.8 YPC) and four touchdowns, adding seven receptions for 67 yards.

Gross-Matos, 22, was a two-year starter at Penn State and earned first-team All-Big Ten honors last season. The Panthers selected him with No. 38 overall pick in this year’s draft.

In 2020, Gross-Matos has appeared in four games for the Panthers and recorded six tackles, a sack and a forced fumble.