Tom Pelissero reports that the Carolina Panthers have fired OC Joe Brady, as the team’s record sits at a disappointing 5-7 for the season. 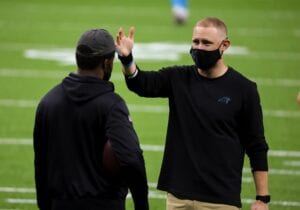 Panthers’ HC Matt Rhule commented on the firing of Brady and it was also announced that he would be available to the media on Monday.

“I met with Joe this morning and informed him that I have decided to make a change,” said Rhule. “I’m very grateful to him for his time and effort in helping us get established over this past year and a half.”

Senior offensive assistant Jeff Nixon will coordinate the offense in conjunction with the remainder of the offensive coaching staff now that the team is moving on from Brady.

Brady, 32, began his coaching career in 2013 at William & Mary as their linebackers coach. He later became a graduate assistant at Penn State and spent two years with the Saints as an offensive assistant.

We’ll have more news on Brady as it becomes available.