According to Adam Schefter, Panthers QB Cam Newton has a chance to cement himself as the favorite to be Carolina’s starting quarterback in 2022 if he plays well down the stretch this year. 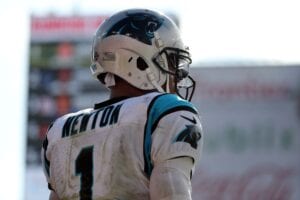 Ian Rapoport says Newton and Carolina initially discussed a two-year deal, but with QB Sam Darnold under contract in 2022 at $18.858 million, a one-year deal ended up being what the two sides settled on.

Schefter says the Panthers “know Darnold is out for the season” in the words of one source so it appears he won’t factor into the final eight weeks regardless.

He is on injured reserve with a fractured scapula, which tends to have a four-to-six-week recovery timeline, but the Panthers are operating as if he won’t be back this year.

As for 2022, Rapoport notes the Panthers do not plan to give up on Darnold, but he confirms they’re open to Newton being in the conversation next year if he plays well enough. It’s worth noting Darnold’s 2022 salary is fully guaranteed due to the fifth-year option.

Newton signed a one-year deal worth up to $10 million with the Panthers after Week 9.

In 2020, Newton appeared in 14 games for the Patriots and completed 65.4 percent of his passes for 2,415 yards, five touchdowns and 10 interceptions. He also rushed for 513 yards and 12 touchdowns.

We’ll have more on the Panthers’ plans at quarterback as the news is available.