According to Adam Schefter, the Panthers have picked up the fifth-year option for WR D.J. Moore. 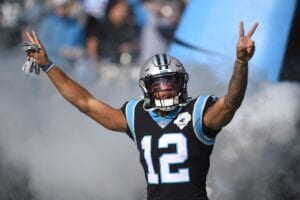 This doesn’t come as a big surprise, as Moore has been Carolina’s leading receiver since being drafted in the first round in 2018.

In 2020, Moore appeared in 15 games for the Panthers and caught 66 passes for 1,1193 yards receiving and four touchdowns. He also rushed twice for 22 yards.