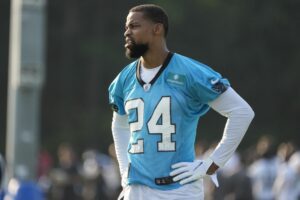 Bouye later departed for a five-year, $67.5 million with the Jaguars. However, Jacksonville opted to trade him to the Broncos last offseason. He was set to make a base salary of $13 million in 2021 when he was released by the Broncos.

He signed a two-year deal with the Panthers this past offseason.

In 2021, Bouye has appeared in 10 games for the Panthers and recorded 28 tackles, no interceptions, a forced fumble and three pass deflections.