Tom Pelissero of NFL Media reports that the Panthers have placed G Michael Schofield on the COIVD-19 list Monday. 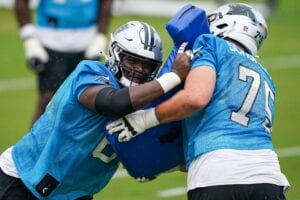 Schofield, 29, is a former third-round pick out of Michigan by the Broncos in the 2014 NFL Draft. Denver elected to waive him at the start of the 2017 season and he was later claimed off of waivers by the Chargers.

Schofield played out the final year of a four-year, $2,777,200 rookie contract before returning to Los Angeles on a two-year contract in 2018. The Panthers signed him to a contract this past April.

In 2020, Schofield has appeared in two games for the Panthers, making two starts for them.