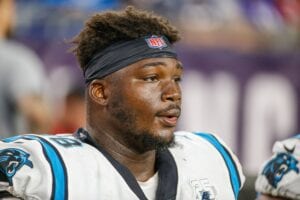 Hamilton, 28, originally signed on with the Patriots as an undrafted free agent out of Mississippi back in 2016. He was on and off of their practice squad the past few years before signing on with the Saints in October of 2018.

After a brief stint on the Saints’ practice squad he signed with the Giants’ taxi squad before getting claimed by the Panthers in December of 2018.

He re-signed with Carolina the following offseason but was among their final roster cuts coming out of training camp. He bounced on and off their taxi squad throughout 2020.

In 2020, Hamilton appeared in five games and recorded three total tackles, no sacks, and one fumble recovery.