The Carolina Panthers announced Tuesday that they’ve signed OL Aaron Monteiro to their practice squad and released QB Josh Love from the unit. 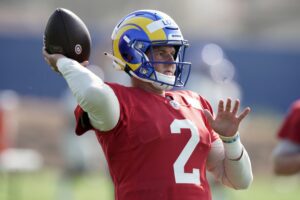 Love, 25, signed with the Rams as an undrafted free agent out of San Jose State back in 2020. He spent the summer with the team before they waived him prior to the start of the season.

The Panthers signed him to their practice squad last week.