Jeremy Fowler of ESPN reports that the Panthers have informed DE Stephen Weatherly and P Michael Palardy that they’re being released. 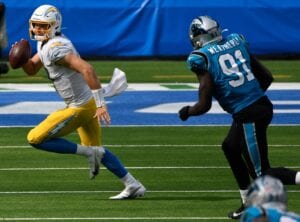 This comes shortly after the news that the Panthers will release S Tre Boston.

Weatherly, 26, is a former seventh-round pick of the Vikings back in 2016. He played out the final year of his four-year, $2.42 million contract with Minnesota.

In 2020, Weatherly appeared in nine games for the Panthers and recorded 17 tackles and no sacks.

Palardy, 28, originally signed on with the Raiders as an undrafted free agent out of Tennessee back in 2014. He lasted less than a year in Oakland before he was signed to the Rams’ active roster.

Palardy had brief stints with the Panthers, Ravens, Colts, Browns, and Falcons before returning to the Panthers in 2016. He returned to Carolina as an exclusive rights free agent for two years before signed a three-year, $7.2 million extension in 2018.

Unfortunately, he spent the 2020 season on the reserve/non-football injury list with a torn ACL.