The Carolina Panthers are signing third-round QB Matt Corral to his rookie contract, according to Ian Rapoport. 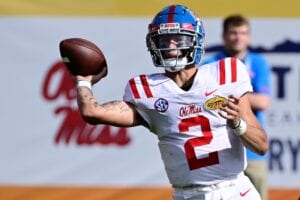 This will wrap up Carolina’s 2022 draft class, as Corral was the final unsigned rookie.

Corral, 23, was a three-year starter at Ole Miss before declaring for the 2022 NFL Draft as a redshirt junior.