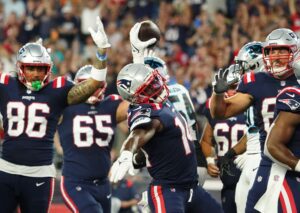 Montgomery, 29, is a former third-round pick of the Packers back in 2015. Green Bay traded him to the Ravens in exchange for a 2020 seventh-round pick back in 2018.

The Patriots signed Montgomery to a tow-year contract this March.

In 2022, Ty Montgomery has appeared in one game for the Patriots and rushed for -2 yards on two carries to go along with three receptions for 15 yards and a touchdown.