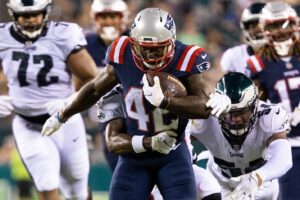 Taylor, 24, wound up going undrafted out of Arizona back in 2020. He later signed a rookie contract with the Patriots.

The Patriots opted to waive Taylor earlier in the week.

In 2022, Taylor has appeared in one game for the Patriots and rushed for nine yards on 10 carries to go along with one reception for eight yards receiving and no touchdowns.