Andrew Callahan reports that Patriots WR Kendrick Bourne has cleared COVID-19 protocols and is expected to play on Sunday against the Bills. 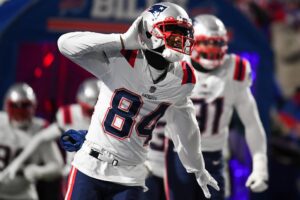 Bourne, 26, signed with the 49ers as an undrafted free agent out of Eastern Washington in 2017. He signed a three-year, $1.66 million deal and made the final roster each of his first three seasons in the league.

The 49ers placed a second-round tender on Bourne as a restricted free agent at $3.27 million for the 2020 season.

Bourne then became an unrestricted free agent this past offseason before signing a three-year, $22.5 million contract with the Patriots.

In 2021, Bourne appeared in 14 games for the Patriots and caught 45 passes for 667 yards receiving and five touchdowns.