Colts owner Jim Irsay tweeted this morning that there’s a chance that QB Peyton Manning will not be ready for the teams first game against the Houston Texans.

Irsay also mentioned that they’ll monitor the quarterback market since their backup QB’s have been unspectacular to say the least.

Manning neck surgery has caused him miss preseason workouts and is serious enough to cost him even more weeks. Even if Manning is able to return to the team for week 1 or 2 there’s no guaranteeing that he’ll be able to return to form. So far Manning has had trouble moving his head from side to side so you can see how that would limit his effectiveness, not to mention the fact that he’ll have very little time working with his team this year. Thankfully the Colts have kept their core in place which should help him but there’s certain to be some rust. 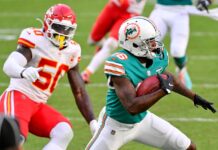