Prominent coaching agent Trace Armstrong denied a report that he discussed a front office role with the Bears.

I have the utmost respect for the Chicago Bears organization, the McCaskey family and Ted Phillips. However, any assertion that I have engaged in conversations with them about joining the club in any capacity is simply not true.

Armstrong played for the Bears from 1989-1994 and is held in high regard by the McCaskey family that owns the team. He represents a number of coaches and executives around the league, including current Bears HC Matt Nagy.

The report originated with CBS Sports’ Jason La Canfora, who says the Bears looked into hiring Armstrong as a part of sweeping structural changes the organization is considering.

But La Canfora wrote the pull to oversee the team he played for might be enough to convince him to step away from his successful agency. And at this point, it’s seen in league circles as an eventuality that Nagy is let go.

La Canfora says the two sides discussed a role that includes Armstrong coming in to oversee football operations and taking that off the plate of team president Ted Phillips, who has handled both the business and football ops side in the past.

Both the head coach and the general manager would report to Armstrong in this scenario. La Canfora notes Armstrong is a huge fan of Ohio State HC Ryan Day, who has not ruled out considering NFL opportunities in the past.

Day spent some time in the NFL as a quarterback coach and obviously has a lot of familiarity with Bears QB Justin Fields.

La Canfora adds Raiders director of player personnel Dwayne Joseph, a former teammate of Armstrong, would be a top candidate for general manager in this scenario as well.

We’ll have more on the Bears’ front office and coaching changes as the news is available. 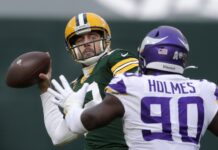