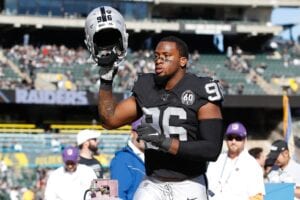 In total, Ferrell spent close to two weeks on the COVID-19 list.

Raiders coach Jon Gruden said Wednesday that he wasn’t sure if Ferrell would be available for Sunday’s game against the Falcons.

In 2020, Ferrell has appeared in nine games for the Raiders and recorded 19 total tackles, no sacks and two pass defenses.