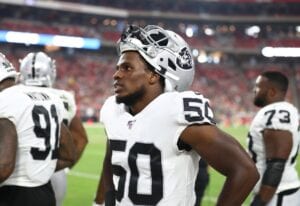 Morrow, 25, wound up signing on with the Raiders as an undrafted free agent out of back in 2017. He played out the final year of his three-year, $1.66 million rookie contract with the Raiders before returning to the team on a one-year restricted tender worth $3.27 million for the 2020 season.

Morrow will be an unrestricted free agent in 2021.

In 2020, Morrow has appeared in 13 games for the Raiders and recorded 67 tackles, two sacks, an interception, a forced fumble, a recovery and nine passes defended.

Irving, 27, originally signed on with the Chiefs as an undrafted free agent out of Iowa State back in 2015. He was waived at the start of the regular season and later added to the Chiefs’ practice squad.

The Raiders signed Irving to their practice squad and has been on and off their active roster.

In 2020, Irving appeared in four games for the Raiders and recorded two tackles.