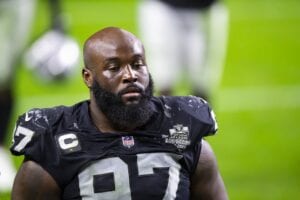 Collins, 25, is a former third-round pick of the Cowboys back in 2016. He played out the final year of his four-year, $3,550,180 contract and was testing the open market as an unrestricted free agent when he agreed to a deal with the Raiders this past March.

In 2020, Collins has appeared in 10 games for the Raiders and recorded 12 tackles and no sacks.

Irving, 27, originally signed on with the Chiefs as an undrafted free agent out of Iowa State back in 2015. He was waived at the start of the regular season and later added to the Chiefs’ practice squad.

The Raiders signed Irving to their practice squad and has been on and off their active roster.

In 2020, Irving appeared in four games for the Raiders and recorded two tackles.