According to Field Yates, the Raiders are placing LB Micah Kiser on injured reserve and he will miss the team’s season due to a serious knee injury. 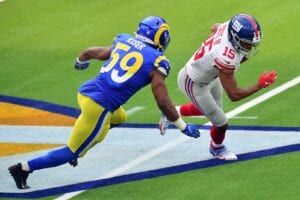 There is a chance that Kiser could be released and play for another team this season if he recovers, but his season with Las Vegas is over after being placed on injured reserve.

Kiser, 27, is a former fifth-round pick of the Rams back in 2018. He was in the final year of his four-year, $2.75M contract when the Rams waived him coming out of the preseason.

Los Angeles brought Kiser back to the practice squad, yet he was signed by the Broncos, who were in need of a linebacker due to injury. He then signed a one-year deal with Las Vegas this offseason.

In 2021, Kiser appeared in one game for the Rams and 10 games for the Broncos and recorded 19 tackles in two starts.

We will have more news on Kiser as it becomes available.