The Las Vegas Raiders have promoted DE Vic Beasley to their active roster and released WR Robert Davis from their practice squad, according to Jerry McDonald. 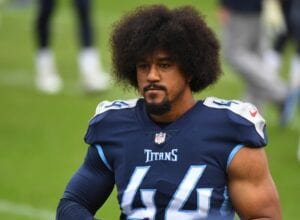 Unfortunately, Tennessee opted to release Beasley midway through the season and he signed on to the Raiders’ practice squad a few weeks ago.

In 2020, Beasley has appeared in five games and recorded three total tackles, one tackle for loss, no sacks, and one forced fumble.