Raiders RB Theo Riddick has retired from the NFL on Friday, according to Field Yates. 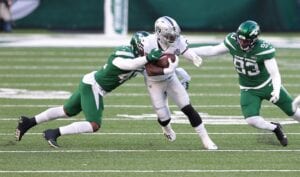 Riddick, 29, is a former sixth-round pick of the Lions back in 2013. He was in the third year of his four-year, $12.3 million contract and set to make base salaries of $2.7 million and $3.2 million over the final two years of the agreement when the Lions released him.

The Broncos later signed Riddick to a contract, but he was placed on injured reserve with a shoulder injury coming out of the preseason.

Riddick signed a one-year deal with the Raiders last year and was on and off of their roster. Las Vegas re-signed him to another one-year deal back in March.

In 2020, Riddick appeared in four games for the Raiders and rushed for 14 yards on six carries (3.5 YPC) to go along with five receptions for 43 yards receiving and no touchdowns.