The Las Vegas Raiders have re-signed veteran TE Derek Carrier on Thursday, according to Paul Gutierrez. 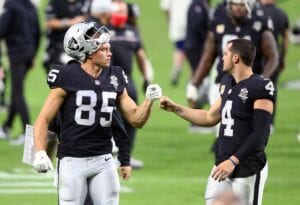 Carrier, 31, originally signed on with the Raiders as an undrafted free agent out of Beloit College back in 2012. He spent a year with the Eagles before joining the 49ers at the start of the 2013 season.

Carrier was later traded to Washington in a deal that sent a 2017 conditional fifth-round pick to San Francisco. Washington wound up trading him to the Rams in exchange for a 2018 seventh-round pick back in 2017.

From there, Carrier signed a three-year, $7 million deal with the Raiders before being released earlier in the week.

In 2020, Carrier appeared in all 16 games for the Raiders and caught one pass for 14 yards.