Ian Rapoport reports that the Raiders are expected to re-sign free-agent WR Zay Jones to a contract. 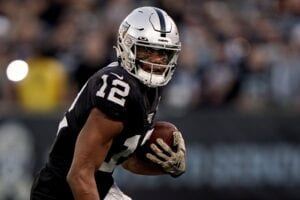 Vincent Bonsignore of the Las Vegas Review-Journal, citing a team source, confirms that the Raiders are re-signing Jones.

Jones, 25, is a former second-round pick of the Bills back in 2017. He’s was in the third year of his four-year, $6.77 million contract that includes $4.3 million guaranteed when Buffalo traded him to the Raiders in exchange for a 2021 fifth-round pick.

Jones made a base salary of $1.33 million in the final year of his deal and was testing the market as an unrestricted free agent.