Ian Rapoport reports that the Raiders are releasing DB Javelin Guidry, whom they claimed off the Cardinals practice squad, in order to clear a roster spot for OT Justin Herron. 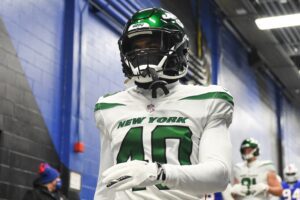 Rapoport adds that he will revert back to the Raiders practice squad if he goes unclaimed on waivers.

Guidry, 26, wound up going undrafted out of Utah back in 2020. He later signed a rookie contract with the Jets before being waived coming out of the preseason.

The Cardinals later claimed Guidry off waivers before cutting him and bringing him back to the practice squad, at which point he was claimed by Las Vegas.

In 2021, appeared in all 17 games for the Jets and recorded 46 tackles and three pass defenses.