The Los Angeles Rams officially claimed DB Tyler Hall off of waivers from the Falcons on Tuesday and waived Jovan Grant and Brandon Wright, according to Aaron Wilson. 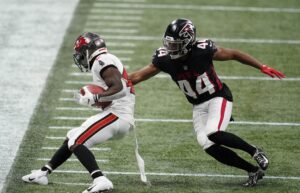 Hall, 22, wound up going undrafted out of Wyoming back in 2020. He later signed a three-year, $2.28 million contract with the Falcons.

However, Hall was waived coming out of training camp and later re-signed to their practice squad. He was on and off of Atlanta’s taxi squad last season before being waived on Monday.

In 2020, Hall appeared in nine games for the Falcons and recorded four tackles and no interceptions.

During his college career at Wyoming, Hall recorded 108 tackles, four interceptions, four forced fumbles, a recovery, 20 passes defended and a defensive touchdown over the course of four seasons and 36 games.