According to Ian Rapoport, Rams G Tremayne Anchrum is out indefinitely after suffering a fractured fibula in the Week 2 win against the Falcons. 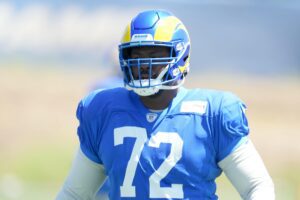 Anchrum was making his first career start so this is an unfortunate break for a young player. It’s also the third interior offensive lineman the Rams have lost to injury, although C Brian Allen is expected back in a few weeks.

Rapoport says the Rams will place him on injured reserve.

For his career, Anchrum has appeared in 14 games for the Rams with one start at right guard.