Ian Rapoport reports that Rams’ QB John Wolford is preparing to start over QB Jared Goff in their upcoming playoff game against the Seattle Seahawks. 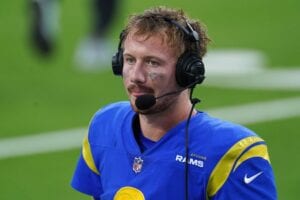 Rapoport adds that HC Sean McVay is yet to make a decision and Goff is also “pushing to play.” Goff was able to throw the ball this week, despite his recent surgery for a broken thumb.

However, Rapoport says it “remains a challenge” for Goff to play.

Wolford, 25, wound up signing on with the Jets as an undrafted free agent out of Wake Forest. He was in the first year of his three-year, $1.71 million contract with the Jets when they waived him coming out of the preseason.

Wolford had a brief stint on their practice squad before signing on with the Arizona Hotshots of the AAF. He joined the Rams in April of 2019 after the league suspended operations and was waived during final roster cuts, but joined the practice squad soon after. He signed a futures contract with the Rams back in December of 2019.