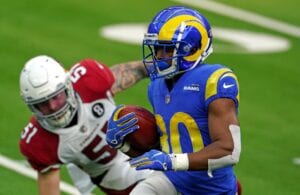 Calais was waived with an injury designation, so if he clears waivers he’ll revert to Los Angeles’ injured reserve list.

Teams have to get their rosters to 80 players by 4 pm on Tuesday.

Calais, 23, is a former seventh-round pick of the Buccaneers back in 2019.  He signed a four-year, $3.4 million contract, but was waived coming out of training camp.

The Buccaneers re-signed Calais to their practice squad before losing him to the Rams a few days later. The Rams had previously placed Calais on injured reserve back in January for a separate injury.

In 2020, Calais was active for four games and totaled 152 kick return yards for the Rams.