Rams HC Sean McVay announced Monday that rookie WR Tutu Atwell will require surgery on his shoulder and will be placed on season-ending injured reserve, per Jourdan Rodrigue. 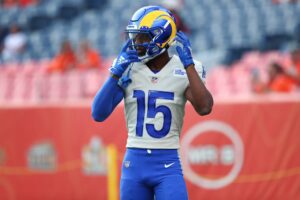 In 2021, Atwell has appeared in eight games for the Rams and totaled 87 kick return yards and 54 punt return yards. He did not catch a pass.

During his three-year career at Louisville, Atwell recorded 140 receptions for 2,307 yards (16.5 YPC) and 21 touchdowns.