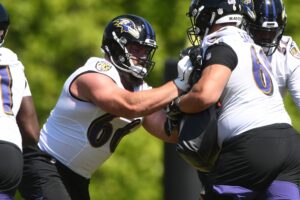 Cleveland, 23, was a four-year starter at Georgia and was named first-team All-ACC in 2020. The Ravens drafted him in the third round of the 2021 draft.

In 2021, Cleveland appeared in 12 games for the Ravens and made four starts at guard.