Aaron Wilson reports that the Ravens are signing CB Kevon Seymour to their active roster. 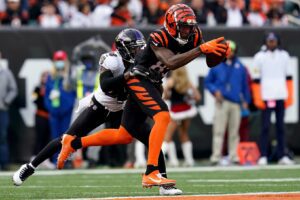 Seymour spent the entire 2018 season on injured reserve for the Panthers before he was waived the following year. The Eagles signed him during the 2020 season and brought him back on a futures contract.

The Eagles released Seymour coming out of the preseason, but he then caught on with the Ravens practice squad for the 2021 season. Baltimore promoted him to their active roster in November.

In 2021, Seymour appeared in nine games for the Ravens and recorded 25 total tackles, one sack and one pass defended.