Aaron Wilson reports that the Ravens have officially agreed to a one-year, $1.035 million deal that includes $895,000 fully guaranteed with WR Demarcus Robinson.

According to Ian Rapoport, the Ravens are expected to sign WR Demarcus Robinson to a contract on Friday. 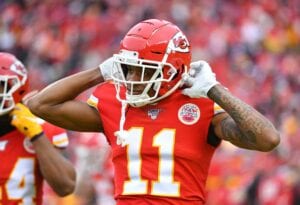 Robinson, 27, was drafted in the fourth round out of Florida by the Chiefs in 2016. He played out the final year of his four-year rookie deal worth $2.85 million.

The Chiefs have brought Robinson back on a one-year deal for the past two seasons. He signed on with the Raiders during the offseason but was cut loose earlier this week.

In 2021, Robinson appeared in all 17 games for the Chiefs and caught 25  passes for 264 yards receiving and three touchdowns.